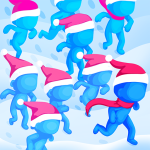 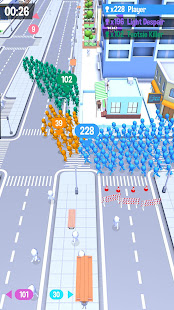 Want to experience something truly fun and unique? Download Crowd City APK and try to make your crowd of people the biggest in town by running into smaller groups of people. The gameplay here is simple yet very satisfying – and very addictive.

Developed by Voodoo – a French games company for mobile – this is just the latest in a succession of amazing Android games under their umbrella.

Crowd City is a classic .io game that has made it over to Android devices after finding success online. It plays a lot like Slither.io – but in a completely different setting. You control a crowd of people running through the city and your goal is to run into other groups of people that are smaller than yours to make them join your group. You’re essentially ‘eating’ the groups of people to make your own group bigger.

The bigger your group is, the more people you can get to follow you by running into them. But be careful – if you run into a group bigger than yours, it will swallow your group and you’ll lose the game. Avoid massive groups and try to make yours the biggest there is!

How to play Crowd City APK

Avoid crowds in the early stages of the game. There are other players out there who will already have big crowds running around the city – avoid them! When you begin the game, you’ll only have one person in your crowd. The goal is to get more people to join you as you run around the city. But make sure that you run away from bigger crowds, or those players will likely chase you down and weaken your crowd – making you easy to take out.

Hunt the small crowds. Once you’ve got a bit of strength behind you, you’ll want to start eating into some of the other crowds. Around 35 people should do the trick. While there might not be much immediate benefit from destroying other players now, later on in the game you’ll be thankful that you did this because now those players can’t compete against you for the top position.

Just tap. In most .io games, you need to keep your finger on the screen to continue moving. Thankfully, this isn’t the case with Crowd City – although many players don’t actually realize this until much later in the game. You only need to tap the screen to make your crowd move in the desired direction, and then you can simply swipe in any other direction you want to move in.

No need to kill them all. When you run into someone else’s crowd, you’ll take their players, which means that your crowd will be bigger. The aim of the game is to have the biggest crowd after two minutes, so you don’t actually need to finish off other players in the later stage of the game – just make sure that you’ve got the biggest crowd to win.

In this game, the player will have to make a precise plan. All those plans will decide for themselves as well as grasp the times themselves. More specifically, players will rely on this plan to divide roles for their teammates more easily. Planning like that will help keep us on the right track and potentially win this mass attraction.

The task this time of the game is that you have to attract a considerable number of people. This group of people will make your squad more vital than ever. More specifically, it is necessary to take advantage of the time to call on the weaker groups to join forces to become the biggest squad in the city. Recruiting will be very important because the evaluation criteria will be based on the number of people in our squad.

How to play Crowd City

The greatest danger our group faces is meeting larger groups. This meeting will be difficult because they may attack and call on those on our side to join forces. So stay away and calculate the next one so as not to lose the original number of people. Moreover, we must watch out for other groups because they will attack and oppress us at any time.

Crowd City will help you show leadership as well as attract your opponents. This popular video game will help you discover new attractive; Players will gather a bunch of people in this modern city. The task is to collect more people who are on your side or turn them into people under your own control. Sometimes when we encounter demonstrations of more substantial groups, we must immediately withdraw our troops to avoid numerical losses.

You May Also Like: My Mini Mart Mod APK

Crowd City This app can be freely downloaded 4.4 and up on ApkLod or Google Play. All APK / XAPK files are original and 100% safe with a fast download.